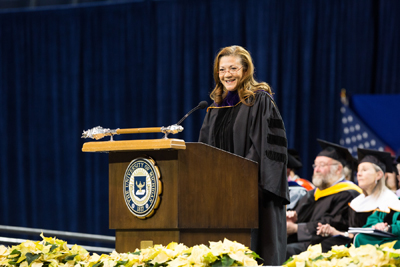 Please see the honorary degree criteria, guidelines, and eligibility before making a nomination. Use of the web form to submit your nomination is strongly preferred. Otherwise, you may download a version of the form, complete it, and e-mail, fax or mail to:

NOTE: Information for all nominations must be presented in the format outlined or they will not be considered.

Nominations may be submitted at any time using the Honorary Degree Nomination Submission Form. The Honorary Degree Committee typically meets twice a year, in the Fall and Spring, to consider nominations and forward its recommendations to the President and Board of Regents.

Following acknowledgement of a nomination, additional information about the candidates will be collected for review by the Honorary Degree Committee. The Committee will consider and approve (or not) the candidates, and the Chair will notify nominators of the result. Even in the case of successful nominations, please remember that it may take a considerable period of time for the degree actually to be conferred. Official notification of the University’s wish to confer an honorary degree upon an individual is made by the President on behalf of the Board of Regents and the University of Michigan; nominators will be informed at that time.