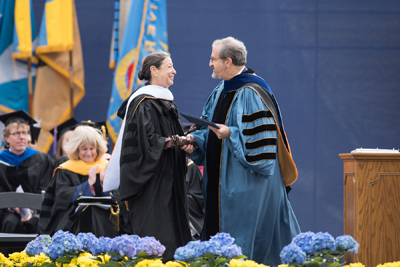 Michele Oka Doner accepts an honorary Doctor of Arts at Spring Commencement in 2016.

The mission of the University of Michigan is to serve the people of Michigan and the world through preeminence in creating, communicating, preserving and applying knowledge, art, and academic values, and in developing leaders and citizens who will challenge the present and enrich the future.

Nominees may be eminent scholars, scientists, artists, writers, educators, or other individuals who have advanced their field of endeavor in significant ways. They may also be professionals or other individuals who have made particularly distinguished contributions to society in areas such as public service, business, humanitarian work, the law, government, or the creative arts.

The Honorary Degree Committee receives nominations and recommends recipients for honorary degrees. The dean of the Rackham Graduate School chairs the committee; faculty members representing the Ann Arbor, Dearborn, and Flint campuses, students and alumni are appointed by the Board of Regents on the recommendation of the president. The president and several executive officers serve ex-officio.

The Honorary Degree Committee typically meets once in the fall and once in the spring to consider nominations and forward recommendations to the president and the Board of Regents. While nominations may be submitted at any time, nominations submitted by Thursday, October 21, 2021 are able to be considered for honorary degree awarding as soon as the Spring 2022 commencement ceremony.

For additional information regarding recommendations for honorary degrees, please see the bylaws of the University of Michigan Board of Regents.

By awarding honorary degrees, the University associates itself and its values with individuals remarkable for their achievements, and seeks to inspire students and others to recognize, respect and emulate such persons and such accomplishments.

Nominees should exemplify with distinction elements of the University of Michigan’s mission: to serve the people of Michigan and the world through preeminence in creating, communicating, preserving and applying knowledge, art and academic values, and to develop leaders and citizens who will challenge the present and enrich the future.

An association with the University of Michigan or a relationship of the achievement honored to work that is unique or highly characteristic of Michigan is welcome but in no way necessary for this recognition.

The University strives for a robust pool of honorary degree recipients enriched by individuals from all backgrounds. Nominations from academic units, including departments, programs, schools and colleges, are particularly encouraged, as are nominations from other campus groups and organizations.

The range of nominations should reflect the University’s absolute commitment to diversity as expressed in myriad forms, including race and ethnicity, gender and gender identity, sexual orientation, socio-economic status, language, culture, national origin, religious commitments, age, (dis)ability status, as well as diversity in the spectrum of thoughts and ideas.

NOTE: Self-nominations will not be accepted for consideration.

Every effort is made to deepen and strengthen the interaction between honorary degree recipients and the university community. When possible, recipients are invited to participate in other activities around commencement that allow broader engagement with students and faculty. Recipients are also often invited to return to campus on other occasions and encouraged to develop a fruitful ongoing relationship with the University.*

Heads of state of other countries may be considered for honorary degrees. Other active office holders are not eligible to receive honorary degrees with the following exceptions:

University of Michigan Faculty and Staff

Exceptions to these policies can be made only by the president, with the advice of the chair of the Honorary Degree Committee.

* In the event that circumstances arise regarding the appropriateness of an honorary degree awarded by the University, the matter will be considered by the Honorary Degree Committee and a recommendation made to the Regents by the President and the Committee Chair.

The nominee should not be informed that his or her name has been put forward, and the nominator should not solicit letters of support on behalf of the nominee. Not all excellent candidates can be recognized, and knowledge of a failed nomination can be embarrassing and harmful. Official notification of the University’s wish to confer an honorary degree upon an individual is made by the President on behalf of the University of Michigan.

To submit a nomination for commencement speaker, please review the guidelines and submission form and complete the field regarding the nominee’s appropriateness as a speaker.