“Alfred Sommer’s work has improved the lives of millions of people worldwide, and his commitment to public health is an exceptional display of research, science and compassion. We are delighted to present him with the Francis Medal.”
—President Emerita Mary Sue Coleman, University of Michigan 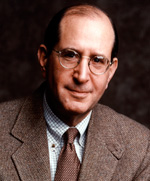 The University of Michigan awarded the Thomas Francis Jr. Medal in Global Public Health to Alfred Sommer, whose research into vitamin A deficiency has saved millions of children from blindness and death.

Sommer is a professor of epidemiology, international health, and ophthalmology at the Bloomberg School of Public Health and the Johns Hopkins University School of Medicine. Vitamin A supplementation is known to be one of the most cost-effective of all health interventions.

“Alfred Sommer’s work has improved the lives of millions of people worldwide, and his commitment to public health is an exceptional display of research, science and compassion. We are delighted to present him with the Francis Medal,” said U-M President Mary Sue Coleman.

Sommer is emeritus dean for the Bloomberg School of Public Health, and has published five books and more than 250 scientific articles. He’s received dozens of top honors, including the Lasker Award for Medical Research, and was the first recipient of the GVF prize of the German Association of Applied Vitamin Research.

Parallel studies Sommer organized with colleagues in Africa showed that most cases of measles-associated pediatric blindness, and half of all deaths, were also related to low vitamin A levels and could be prevented by timely administration of vitamin A to all cases of severe measles.

Next, Sommer and his colleagues ran large-scale randomized trials from 1983 through 1992 and demonstrated the link between even mild vitamin A deficiency and pediatric mortality.

Coincidentally, the Thomas Francis Jr. Medal ceremony occurred the same fall as the 50th anniversary of John F. Kennedy’s announcement of the idea for the Peace Corps on the steps of the Michigan Union. U-M celebrated this anniversary with a series of campus events. Sommer has a strong connection and loyalty to the Peace Corps. While still in medical school he and his wife signed up for and were accepted for Peace Corps service, but a position at the Centers for Disease Control and Prevention in Atlanta became available, and Sommer accepted an assignment to the Cholera Research Laboratory (now ICDDRB) in Dhaka, Bangladesh, where he conducted groundbreaking epidemiologic investigations into cholera, smallpox and provision of disaster assistance.

Followed by a panel discussion featuring: