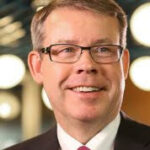 Tom Baird has responsibility for all fundraising and development activities across the university. This includes leading the central Office of University Development as well as oversight of more than 30 U-M fundraising units, including Michigan Medicine, UM-Flint and UM-Dearborn.

A 1983 U-M alumnus with 23 years of experience in higher education philanthropy, he focuses intently on organizational leadership, creating a positive work culture and developing trusted relationships. He most recently spent three years as assistant dean for advancement at the College of Literature, Science, and the Arts, helping the 85-person team raise more than $544 million, or 136 percent of LSA’s Victors for Michigan campaign goal.

Prior to his career in university fundraising, he worked in the financial services and airline industries. He earned a bachelor’s degree in American studies from U-M and a master’s degree in human resources education from Boston University.