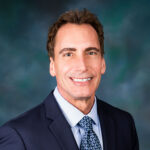 Chris Kolb is responsible for providing university-wide leadership, strategic vision and effective management of U-M’s government relations programs at the local, state and federal levels, as well as the Economic Growth Institute and U-M’s participation in the University Research Corridor.

He has embraced public service throughout his career, with extensive experience in state and local government, public policy and community relations. He was the state of Michigan’s budget director for two years, following his appointment by Gov. Gretchen Whitmer in 2019. In this role, he was responsible for coordinating all aspects of the state’s $60 billion budget.

He previously served for nearly 10 years as the president and CEO of the Michigan Environmental Council, a nonprofit coalition of more than 60 environmental organizations. In 2015, Gov. Rick Snyder appointed him to co-chair the Flint Water Advisory Task Force, which investigated the city’s drinking water crisis and provided recommendations to prevent similar disasters statewide.

Kolb’s career includes three terms in the Michigan House of Representatives and service as an Ann Arbor City Council member and mayor pro-tem.

He earned a bachelor of science degree in natural resources from U-M and is a former member of the external advisory board for U-M’s Erb Institute, the Detroit Community Health Assessment Steering Committee, the Michigan League of Conservation Voters and the Michigan Sea Grant Advisory Committee.