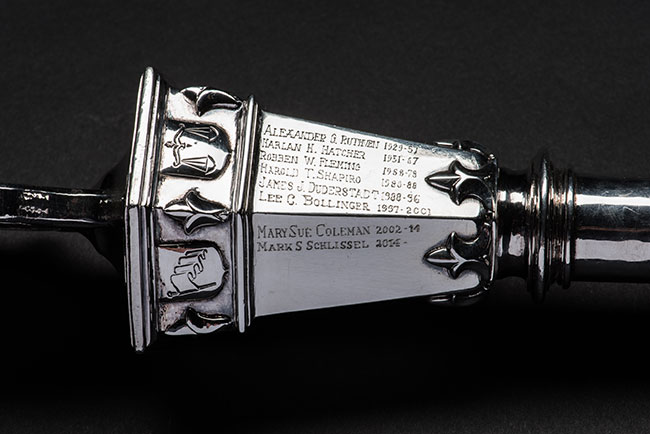 The names of the University presidents are engraved in the ceremonial mace.

MARY SUE COLEMAN, 2002-2014
13th President
Coleman became U-M’s first female president after serving seven years as president of the University of Iowa. She led U-M during the worst economic downturn since the Depression with new faculty hires, greater interdisciplinary teaching and research, a vibrant entrepreneurial culture, major building projects, and the $3.2 billion Michigan Difference campaign. A strong advocate of diversity, she launched academic partnerships on three continents. She retired after 12 years as president.

B. JOSEPH WHITE – 2002
Interim
The Wilbur K. Pierpont Collegiate Professor and professor of business administration, White was appointed following Bollinger’s unexpected resignation. From 1991-2001, he served as dean of the U-M Business School and from 1992-2001, was president of the William Davidson Institute. He received his Ph.D. from Michigan.

LEE C. BOLLINGER – 1996-2001
12th President
Bollinger began his academic career in 1972 as an assistant professor in the Law School. He became a recognized authority on the First Amendment and authored several books on free speech issues. He served as dean of Law School from 1987-1994 before leaving to become provost of Dartmouth University. His tenure brought a renewed emphasis on the arts, highlighted by a residential program with the Royal Shakespeare Company. He resigned to become president of Columbia University.

JAMES JOHNSON DUDERSTADT – 1988-1996
11th President
A nuclear engineer by training, Duderstadt had served as dean of the College of Engineering and vice president for academic affairs. Foreseeing a world in which knowledge, globalization, and pluralism would be critical elements, he initiated the Michigan Mandate to bring more diversity to campus and moved to reshape academic programs to prepare students for the global economy and information revolution. He also oversaw a major program of new construction and rehabilitation of the campus infrastructure.

ROBBEN WRIGHT FLEMING – 1988
Interim
He served as chairman of the Corporation for Public Broadcasting after resigning as university president in 1979. He was called back to campus to serve as interim president when Shapiro resigned.

HAROLD TAFLER SHAPIRO – 1980-1987
10th President
Canadian by birth and educated at Princeton University, Shapiro he joined the U-M Economics Department in 1964 and co-directed the Research Seminar in Quantitative Economics, famous for its economic forecasting models. “Smaller but better” became the watchword of his tenure as the university experienced a series of budget crises and declining rates of state support. He resigned to become president of Princeton.

ROBBEN WRIGHT FLEMING – 1968-1979
9th President
Fleming, chancellor of the University of Wisconsin and former professor of labor relations specializing in arbitration and mediation, became president in January 1968. That background served him well during the tumultuous years of 1968-1979. Though Ann Arbor was a center of student activism, Fleming’s patience, negotiating skills and genuine sympathy for the concerns of students and faculty helped Michigan weather the decade without the destructive confrontations that struck some universities.

HARLAN HATCHER – 1951-1967
8th President
A former dean and English professor at Ohio State University, Hatcher’s 17-year tenure saw dramatic expansion in enrollment and the physical campus. Student population grew from 23,000 to 41,000. Acquisition and development of the North Campus began, and the Flint and Dearborn campuses were opened. Controversies over the firing of two faculty members during the McCarthy era and the rise of student activism also marked Hatcher’s years.

ALEXANDER GRANT RUTHVEN – 1929-1951
7th President
Just weeks before the stock market crash of 1929, Ruthven was named the university’s president. He received his Ph.D. in zoology from Michigan in 1906 and immediately became an instructor in the department and curator, later director, of the University Museum. He guided the university through the Great Depression, World War II and the beginning of post-war expansion. He restructured the university’s administration in a more corporate style and allowed for a greater role in governance by deans and faculty. Ruthven retired as president in 1951.

CLARENCE COOK LITTLE – 1925-1929
6th President
Thirty-six-year-old Little, then president of the University of Maine, was named president in September 1925. A cancer researcher with outspoken views on educational reform, he proposed establishing a “University College” in which all students would be enrolled for their first two years. The faculty and deans were generally skeptical of the plan, leading to strained relations with Little, who lacked Burton’s tact and political skills. Little resigned in June 1929.

MARION LEROY BURTON – 1920-1925
5th President
Burton, president of the University of Minnesota, became Michigan’s fifth president. Tall, red-headed, with a commanding presence and a persuasive voice, he could captivate students and legislators alike. His talent for organization and vision of an expanding university exactly fit the needs and spirit of the post-war age. His tenure was tragically short, however, as he died in February 1925 following a heart attack. He had doubled the university’s annual income and secured more than $10 million in appropriations and $2 million in gifts for new buildings.

HARRY BURNS HUTCHINS – 1909-1920
4th President
In August 1909, Hutchins, dean of the Law Department, was named interim president for one-year to succeed President Angell. After several candidates, including Woodrow Wilson, declined to accept the presidency, the regents decided to make Hutchins president for a three-year term. Following some stormy negotiations, Hutchins accepted a five-year appointment. At the end of his term the regents asked him to continue in office and Hutchins served until 1920.

JAMES BURRILL ANGELL – 1871-1909
3rd President
Angell’s 38-year tenure is the longest of any U-M president. A charismatic, persuasive and paternal figure, he was known to generations of students as “Prexy Angell.” During his tenure, enrollment grew from 1,100 to more than 5,000. The student body was too large for a successor to impress a personal stamp on the campus in the way Angell had. Because of his expertise in international affairs, Angell was called upon for occasional diplomatic service. He was minister to China from 1880-81, a member of a commission to negotiate a new immigration treaty, and served on three U.S.-Canadian commissions during the Cleveland administration.

HENRY SIMMONS FRIEZE – 1869-1871; 1880-1882; 1887
Acting
Professor of Latin language and literature from 1854 to 1889, Frieze served three terms as interim president. The first following President Haven’s resignation and later as acting president while Angell was abroad on diplomatic missions. Two significant innovations took place during his interim presidency: women were first admitted in 1870 and the diploma system of admission was instituted.

ERASTUS OTIS HAVEN – 1863-1869
2nd President
A professor of Latin, history and literature from 1852-56, Haven was called to serve as president in the wake of the controversies surrounding Tappan’s dismissal. He was able to win over elements from both camps and succeeded in consolidating some of the reforms Tappan had instituted and secured an annual appropriation from the Legislature.

HENRY PHILIP TAPPAN – 1852-1863
1st President
Former professor of philosophy at New York University and author of a noted critique of higher education in the United States, Tappan was a forceful advocate of the “German model” of university education. He moved the university from a strictly classical curriculum to a broader scientific curriculum. He supported development of a library, laboratories, an art gallery and astronomical observatory. Difficulties with the regents on matters both of policy and personality, led to his dismissal in June 1863.