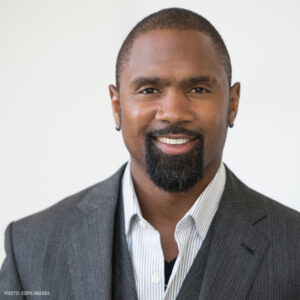 Cornerback and safety Charles Woodson, one of America’s most celebrated gridiron stars, played in 34 straight games for the University of Michigan from 1995 to 1997 and, as a junior, led the Wolverines to a national championship. Born in Fremont, Ohio, he is the third — and the only defensive — U-M player to win the Heisman Trophy. He also was recognized as the Bronko Nagurski National Defensive Player of the Year twice and received the Jim Thorpe Award. He declared his eligibility for the National Football League (NFL) draft following his junior year, and enjoyed a successful 18-season NFL career, starting and ending with the Oakland Raiders. He played seven years with the Green Bay Packers, including when the team won Super Bowl XLV in 2010. Mr. Woodson, winner of the Art Rooney Sportsmanship Award, retired in 2015 and joined ESPN as a football analyst in 2016. He established the Charles Woodson Foundation, which supports research at U-M’s C.S. Mott Children’s Hospital and Von Voigtlander Women’s Hospital, including investigators engaged in early-stage projects in pediatric care. Since 2008, his foundation has provided multiple scholarships to promising students. He created the Charles C. Woodson Scholarship in the School of Kinesiology and the Georgia A. Woodson Scholarship Fund in the Office of Financial Aid in honor of his mother. The University has recognized his generosity with the first Mott Champions for Children Award and the David B. Hermelin Volunteer Fundraising Award. Mr. Woodson also is proprietor of Charles Woodson Wines.

For his athletic prowess, sportsmanship, and generous support of research and student scholarships, the University of Michigan presents to Charles Woodson its Bicentennial Alumni Award.