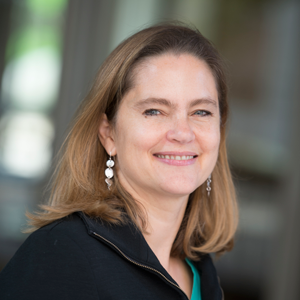 Structural biologist and chemist Cathy Drennan is acclaimed for her pioneering scientific contributions, including determining the structure of an enzyme involved in DNA synthesis, and for her teaching innovations. Professor Drennan, who grew up in the New York/New Jersey area, earned an A.B. degree in chemistry from Vassar College and a Ph.D. (1995) in biochemistry from the University of Michigan, where she worked with the late Professor Martha L. Ludwig. Professor Drennan completed a postdoctoral fellowship at the California Institute of Technology. A Massachusetts Institute of Technology (MIT) faculty member since 1999, she also holds the prestigious Howard Hughes Medical Institute Professorship and Investigatorship. Her primary research interest is the use of X–ray crystallography to study the structure and mechanism of metalloproteins, proteins that contain metal atoms and are involved in many biological processes. She also has created free resources to help students recognize underlying chemical principles in biology and medicine and to train graduate student teaching assistants and mentors to be effective teachers and scholars. Professor Drennan has authored more than 130 papers in Nature and Science, among others. She is highly regarded for her service to the scientific community, mentorship of junior scientists, and wide-ranging scientific collaborations, including with U-M faculty members. Among other accolades, she received MIT’s Everett Moore Baker Memorial Award for Excellence in Undergraduate Teaching and the Harold E. Edgerton Faculty Achievement Award, the American Society for Biochemistry and Molecular Biology Schering-Plough Award, and the Presidential Early Career Award for Scientists and Engineers.

For her many significant contributions to science and pedagogy, the University of Michigan presents to Cathy L. Drennan its Bicentennial Alumni Award.