Physician and former Executive Director of the Detroit Health Department 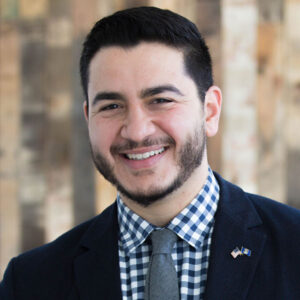 As executive director of the Detroit Health Department, physician, epidemiologist, and environmental justice advocate Abdul El-Sayed was responsible for the health and safety of more than 670,000 Detroiters. In 2016, the Michigan League of Conservation Voters recognized him as Public Official of the Year. He stepped down from his city post in February to pursue statewide public office. Born and raised in the Detroit area, he earned a B.S. degree (2007) with highest distinction in biology and political science and delivered the University of Michigan student commencement address. After completing two years of graduate study at the U-M Medical School, he won a Rhodes Scholarship and went on to receive a doctorate in public health from the University of Oxford and a M.D. degree from the Columbia University College of Physicians and Surgeons. Dr. El-Sayed worked as an assistant professor of epidemiology at Columbia prior to returning to Detroit in 2015, at age 30 the youngest health official of a major American city. During his tenure, he created programs to reduce infant mortality and unplanned pregnancy, track and prevent lead poisoning in Detroit schools, provide free eyeglasses to children in need, and reduce harmful sulfur-dioxide emissions. Dr. El-Sayed is the author of more than 100 scholarly articles, abstracts, and book chapters, and co-editor of the textbook Systems Science and Population Health (2017). He previously served on the State of Michigan Child Lead Poisoning Elimination Board and U.S. Department of Health and Human Services National Health Promotion and Disease Prevention Advisory Committee.

For his leadership and contributions to public health and passion for public service, the University of Michigan presents to Abdul El-Sayed its Bicentennial Alumni Award.