To commemorate the University of Michigan’s bicentennial, President Mark Schlissel sponsored and hosted a series of three colloquia that deeply explored topics related to the future of the University.  Since its establishment in August of 1817, the University of Michigan has actively contributed to shaping the uniquely American model of the great modern public university: an institution that combines research, education and public service; that stresses both the life of the mind and the life of practical achievement; that is broadly accessible while devoted to educating the leaders of the future.  The president appointed distinguished faculty leaders to serve as Presidential Bicentennial Professors who organized and oversaw these colloquia, as well as surrounding discussions and activities.

Today the university and higher education in general face a number of challenges.  The President’s Bicentennial Colloquia engaged the broader higher education community in discussion surrounding these challenges, drawing meaning from the university’s past as its future is imagined. In conjunction with each colloquium the president and provost encouraged university deans to organize workshops on the topics in question, within individual schools or in clusters of schools as appropriate, to explore ideas for Michigan’s future.

Dozens of other lectures, seminars, and exhibitions generated widespread engagement with topics related to University progress and reflection on its past. These thought-provoking events energized the campus community to leap into its third century.

Who will be the University’s future students, faculty, staff and alumni, and how will they engage in the work of the university?  As an institution long committed to the idea that diversity is fundamental to learning and the advancement of knowledge, how should we think of diversity in our third century and what will be the challenges to sustaining it?  Furthermore, how will we constitute an academic community across a diverse spectrum of ideas, experience, and points of view?  How will we take up the challenge of learning that extends over a lifetime?

The Future University Community colloquium examined these questions through a discussion with two of the world’s most prominent legal scholars, Justice Susanne Baer of the Federal Constitutional Court of Germany and Associate Justice Sonia Sotomayor of the U.S. Supreme Court. Award-winning journalist Michele Norris, former host of NPR’s All Things Considered, moderated the discussion. Additionally, President Schlissel conferred an honorary Doctorate of Laws upon Justice Sotomayor during the event, one of the only honorary degrees awarded during the Bicentennial year. Watch the full discussion here. 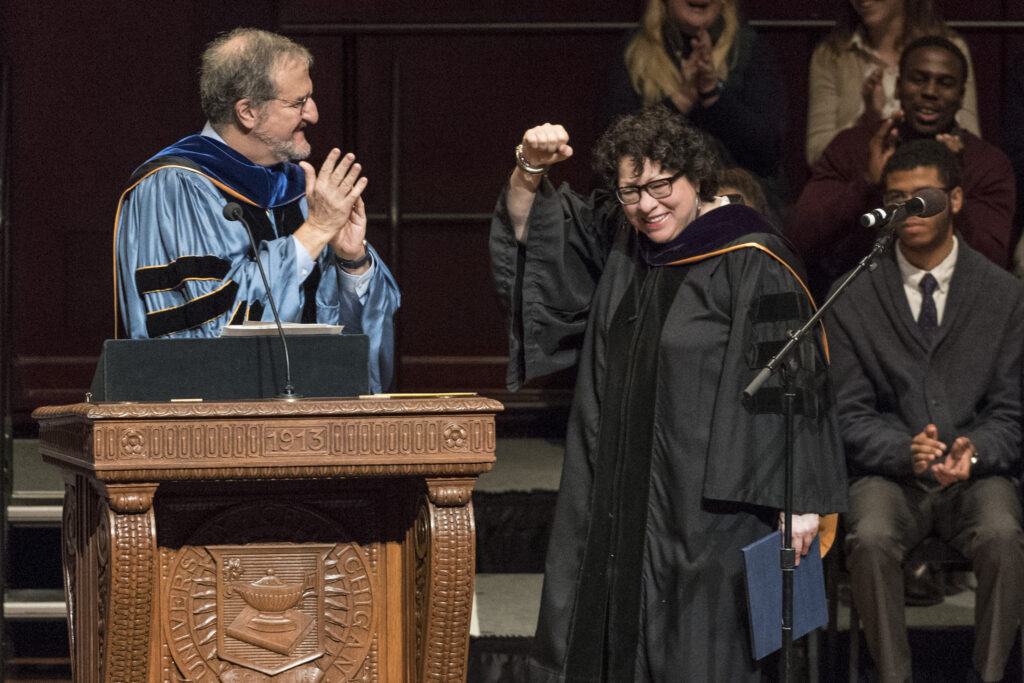 Considering our aspirations for a diverse campus community also meant understanding challenges from U-M’s past. This colloquium also featured some of these moments the week of April 3-8, 2017, with “stUMbling blocks,” an exhibition of temporary public art installations strategically placed around campus. The exhibit was timed to correspond with the Bicentennial Spring Festival.

The seven installations drew attention to various chapters from U-M’s history. Prominent and provocative, the displays asked us to redefine our community, recalibrate our goals and set out new aspirations that are informed by the past. Each installation was accompanied by quotes from relevant community members. 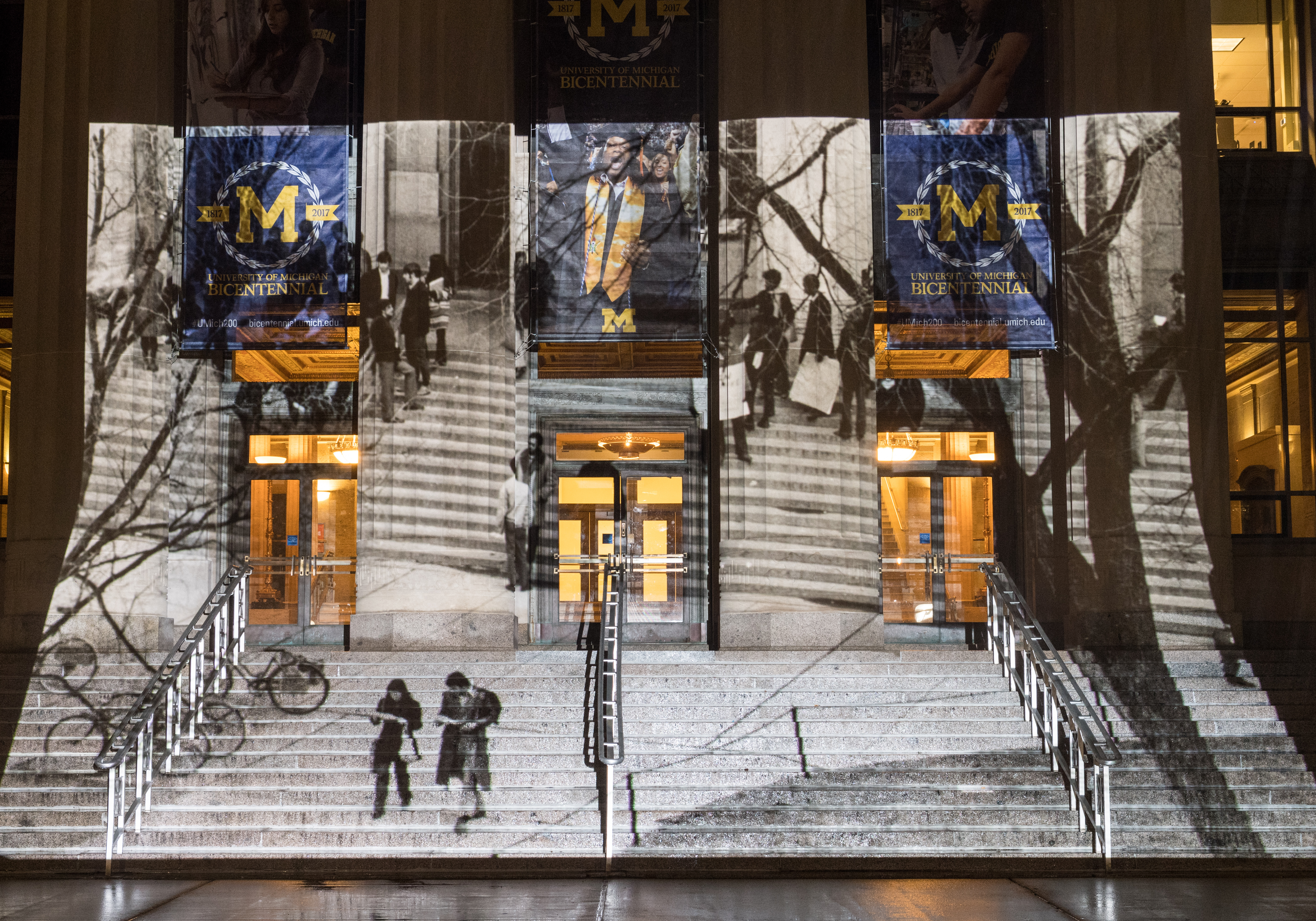 ‘Stumbling Blocks’ Student Protest themed exhibit at Angell Hall. Historical images of student protests at U-M were projected onto the building, inviting reflection on how student protests have shaped the university, from the 1930s until today.

View the Record story on the colloquium

The Evolving Bargain between Research Universities and Society

This colloquium explored the future public missions of the University – the University’s roles, in Harold Shapiro’s phrase, as “servant and critic of society.” It addressed how the University can best engage with the many public interests, concerns and controversies that are inevitably part of its work, as well as what should be expected of the University and how to manage and respond to those expectations. The event overlapped with the 2017 Tanner Lecture Board meeting, allowing several other prominent voices to weigh in on such a broad issue through a panel discussion. The Tanner Lecture Board is a group of prominent university leaders from around the world who promote educational and scientific discussions relating to human values.

In addition to the colloquium, Presidential Bicentennial Professors Dr. Susan Alcock and Dr. Paul Courant taught a seminar on the topic, examining these broad questions including the value of undergraduate education, research, the role(s) of the research university in promoting economic and social opportunity, and controversies over the content and quality of education and student life.

The Research University and Society: Five U-M Presidents on 40 Years of History

View the Record Story on the colloquium.

The Campus of the Future

Exploring the meaning behind being a place-based, residential university entering its third century, this colloquium examined what is special and unique about the residential experience – bringing together people (students, faculty, staff) from different areas and putting them next to one another.  It addressed the multiple functions of the University and how the University’s learning experiences can be designed to take advantage of the co-location of different people and different functions.  What are the various places of the university – locally, national, globally – and how do they fit together in an overall mission?  How do we create places designed for third-century learning and pursuit of knowledge and how should the physical places and spaces of the university link to the digital spaces of the University?

The colloquium invited students from all majors to submit projects to a competition to reimagine our current methods and spaces for teaching and learning at Michigan in the 21st century. Nearly 50 entries were submitted, and of those more than 30 were featured at a project showcase. At the finale event on October 26, a panel consisting of Kwame Anthony Appiah, Babak Parviz, and Jenny Sabin interacted with the students and engaged them about their projects. Watch the full colloquium here.

At the end of the event, the panel awarded $30,000 in prize money for the best ideas:

View Record Story on the colloquium.